We educate visitors and encourage their participation in conservation efforts.

THE MYRTLE BEACH SAFARI (MBS) was founded in 1982 and has grown to be one of the most respected private preserves in the world. That year was pivotal for wildlife conservation. For the first time, thanks to passage of amendments to the Endangered Species Act (ESA), the status of species would be made on the basis of biological importance rather than economic impact. The 1982 ESA amendments created hope of survival for many of the most endangered species.

It soon became evident, however, that traditional zoos had neither the space nor funds to sustain the effort on their own. Private preserves such as the Myrtle Beach Safari (known then as the TIGERS Preserve) stepped in to help. Since its founding, the MBS’s preservation efforts have been instrumental in saving many rare and endangered species from extinction. These include tigers, lions, cheetahs, orangutans, chimpanzees, gibbons, and gorillas. 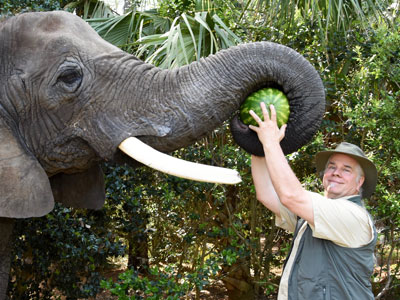 Bhagavan “Doc” Antle is the founder and director of the Myrtle Beach Safari, a world-renowned 55-acre wildlife preserve in Myrtle Beach, South Carolina that receives more than three million visitors each year. Doc credits his love of animals to his upbringing on a cattle ranch in Arizona. In his twenties he traveled the globe, settling in China long enough to earn a doctorate in traditional medicine. Today, he is among the most noted animal trainers in the world. His organization sponsors outstanding in-situ conservation programs worldwide, with emphasis on educational initiatives in South America, Africa and Thailand. Doc has worked on more than 500 films, documentaries, TV shows and advertisements promoting best wildlife conservation practices, He is a frequent wildlife expert for networks such as the National Geographic Channel, BBC, Discovery Channel and CNN. 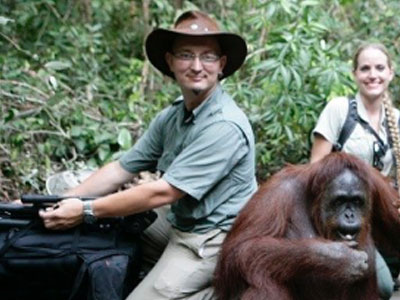 Rob earned his Ph.D. in the field of wildlife conservation and has been with the Safari since 1994. He divides his time between teaching Apex Predators class at Coastal Carolina University, managing the Safari property, and directing educational programs. “We’ve hosted thousands of guests here every season,” he says, “and it is inspiring to see visitors transformed by their up-close encounters with wildlife. It’s a hard job, but those kinds of rewards are beyond description.” 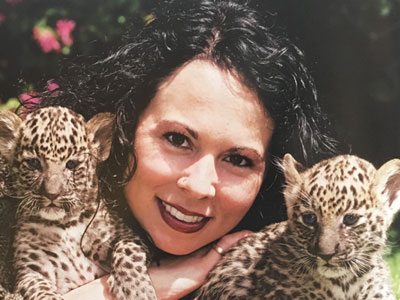 Rajani earned her degrees in history and anthropology and has served on staff since 1998. She is responsible for managing the Myrtle Beach Safari facilities and is the primary caregiver for all of the Safari’s feline and canine babies. Her interests include history, sports and travel. 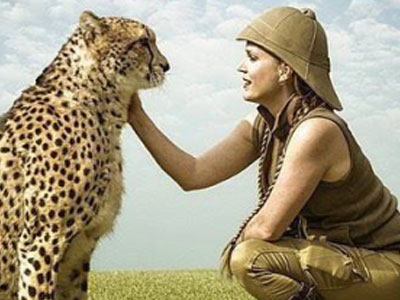 Moksha grew up in Utah surrounded by farm animals and the wide outdoors. She has been with the Safari since 2001 and goes by the moniker “Monkey Mama,” since she raises all the baby monkeys and apes. She is an avid sportswoman and one of the Safari’s top tour guides. 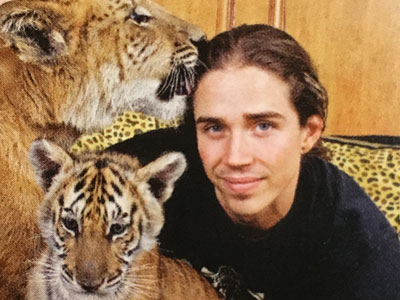 Kody grew up working with the animals at the preserve. When he was younger he helped his father, Doc Antle, train the smaller cats. Now he is the facility’s main trainer and travels to Asia and Africa to help train staff at other wildlife facilities. Evenings, he sometimes shares his Virtual Reality goggles with the gibbons and chimps before they go to bed. 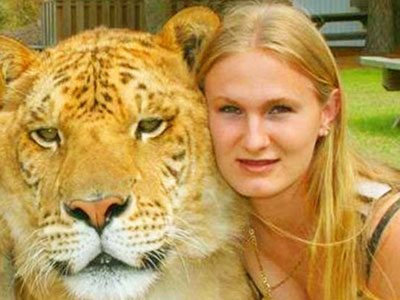 China runs the Miami facility. She grew up in Pensacola, Florida and recalls working at Domino’s Pizza at age 17, where her biggest concern was getting enough sauce on each slice. “The time came to live my dream of working with big cats,” she says, “and now I direct our overseas safaris, which include tours to Africa and Thailand. I couldn’t ask for a better life.” 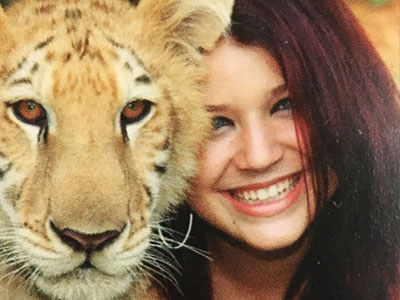 Doc’s daughter was born and raised at the preserve and calls her life a dream come true. “Visiting Africa, going with my father on photo shoots, and best of all helping preserve and protect the most beautiful creatures in the world—I wouldn’t trade this life for anything,” she says. 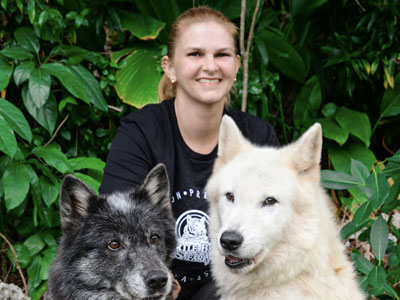 Amy was working at a zoo in Virginia when her sister, China, offered her a job at the preserve. “If she had told me I’d be sleeping with a gibbon in my bed every night,” she says, “I don’t think I would have believed her. But over the last several years, working with these amazing animals has become my life’s passion.” 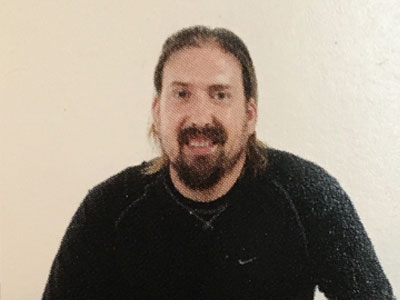 Chris is a professional animal trainer who has been working with exotic animals for more than 20 years. At the preserve, he serves on the development committee for educational programs, conservation efforts, and public outreach.